A Robust Vision of the Preaching Vocation

I’m convinced that there are two kinds of teachers who change our lives. First, there are those who wow us with their expertise, who deepen our interest in a given subject area because of their own fascination with it. The extent of their knowledge is awe-inspiring.

Then, there are the teachers whose astonishing expertise is matched by equal depth of character. The power of their personality seems to mesh with the content and can take us beyond the bounds of their specific discipline, whether it’s New Testament, ethics, or homiletics. Their classes reframe the world and help us inhabit it in a new way. These teachers help us discover hidden gifts within ourselves. And, in many ways, their courses never end. The teacher’s voice is always with us. Charles L. Campbell, the James T. and Alice Mead Cleland Professor of Homiletics, is such a teacher.

I have learned so much from him. His classrooms were hospitable to the independent mind, places where curiosity and debate were welcome, places where I was encouraged to sit with complex dilemmas instead of rushing to resolve them. The learning process was a liberating experience in keeping with bell hooks’ description of education as the practice of freedom.

Too often, whiteness and hierarchy haunt classrooms. “Chuck,” as he is affectionately known, actively resisted these dynamics. He was much more interested in what we really thought than in our ability to rehash what a given author wrote. His group facilitation showed us we didn’t have to be competitors; we could be friends. In fact, we’d grow more if we were intentional about nurturing each other’s voices.

Listen to a podcast with Charles Campbell on the topic, “Why Women’s Issues Are Every Pastor’s Issues.” Are women’s issues exclusively the concern of the feminist? What role does the minister play in women’s advocacy? What does it look like to step beyond a stigma of feminism toward a pastoral, compassionate concern for women’s issues in the Church? Hear stories of why women’s issues should matter to every pastor.

“People, their predicaments, creation, and Scripture are to be taken seriously. Only then can preaching be done with the requisite humility, honesty, and willingness to risk. ”

— Donyelle McCray, reflecting on the example of Charles Campbell

I had the honor of having Chuck as my doctoral dissertation advisor. Since I love the World Cup, we celebrated every milestone of this process (the language exams, comprehensive exams, and dissertation proposal review) with a response inspired by the Argentinian-American soccer commentator, Andrés Cantor: “¡GOOOOOOOOOOOOL!” “¡GOOOOOOOOOOOOL!” Given how intense and solitary doctoral work can be, it meant the world to know my advisor was rooting for me.

Of course, Chuck’s support came with candid and exacting feedback. Woe unto those who casually use words like wrestle or bullet point without scrutinizing the violence in the English language. I thought he was a little extreme at first, but the routine violence in American culture suggests otherwise. He urged us to choose words carefully and mean what we say.

Chuck has the patience of Job. I know because I’ve tested it with a few of my wilder ideas about preaching and graffiti. He listened patiently and never tried to put me in a box. Yet his support for new voices in homiletics extends far beyond his advisees or Duke University to homiletical scholars around the world. He is instrumental in fostering international conversations about homiletics, and his scholarship has altered the terrain of the discipline. Books like Preaching Jesus: The New Directions for Homiletics in Hans Frei’s Postliberal Theology, The Word Before the Powers: An Ethic of Preaching, and my personal favorite, Preaching Fools: The Gospel as a Rhetoric of Folly have been translated into multiple languages. His forthcoming work on the gospel and the grotesque is suited for this historical moment when the world is off-kilter. These volumes are gifts to homiletical scholars and essential texts for preachers who want to knit communities together and reckon with the powers and principalities of this age. Chuck’s work helps us re-conceive the authority of preaching and its role in the public square. The homiletics discipline is braver and more honest as a direct result of his scholarship.

Am I biased? A tad. But his role as president of the Academy of Homiletics and the honor of delivering the 2018 Lyman Beecher Lectures at Yale, not to mention his many international lectureships, show that I am not alone in this estimation.

One of the world’s most distinguished lecture series on preaching, the Lyman Beecher Lectureship was founded in 1871 by a gift from Henry W. Sage of Brooklyn, N.Y., to sponsor an annual series of lectures on a topic appropriate to the work of the ministry. Charles Campbell, professor of homiletics at Duke Divinity School, continued the tradition with his three-part lecture on “The Scandal of the Gospel: Preaching and the Grotesque.”

More than authoring path-breaking books and being a sought-after lecturer, he is a teacher who knows how to share power rather than monopolize it. He embodies the ethics that he teaches in the classroom and preaches from the pulpit. Of his many gifts to students, none is more important than his own example. He demonstrates the importance of being as concerned about students’ well-being as with their grasp of course material, and of engaging real-life issues without taking himself too seriously.

Instead, Chuck makes it clear that people, their predicaments, creation, and Scripture are to be taken seriously. Only then can preaching be done with the requisite humility, honesty, and willingness to risk. Not surprisingly, it also helps to have the mechanics down: a “way in” (or sermon opening), good “movement” or momentum, “oral” and “evocative language,” and a “way out” of the sermon that looks toward the future or communicates the eschatological thrust of the text. “Showing” through story or analogy crystallizes concepts better than flat “telling.” And he reminds us to leave the “paper language” (long, convoluted, and arcane phrasing) for the papers. These are just a few of Chuck’s lessons that help us peel back the husk of our sermons and reveal the soul-nourishing fruit.

Whenever I heard him outline homiletical theory, he stressed the theological foundations and emphasized that sermon strategies were not ends in themselves. One of Chuck’s exemplars, William Stringfellow, explains in his sermon “Homily on the Significance of the Defeat of the Saints” that “the categories of popularity, effectiveness, [and] success, are in truth impertinent to the gospel.” Faithful preaching often appears foolish according to contemporary norms of success, so part of the preacher’s task is coming to terms with nonconformity. Stringfellow continues: “Christians do not covet anyone’s approval or applause.” Our hope is in the judgement of God. Chuck emboldens us in a similar way with his robust vision of the preaching vocation.

Many preachers who attended Columbia Theological Seminary (where Chuck taught for 17 years) or Duke Divinity School can pinpoint crucial insights they learned from him. And many more who study his books still benefit from his work. But it’s the invisible influence that I find most compelling. I’m imagining the sermon listeners near and far who have arisen from their pews week after week and year after year having received a “fitting word” that equips them to face life’s demands. I’m imagining the sermon listeners who hear a lively message and, without ever wondering why it worked, feel inspired to live out the call of the gospel. If, as I believe, a teacher’s true influence is largely hidden from view, we can only discern the innermost ring of people blessed by Chuck’s ministry. The waves of his influence ripple on. 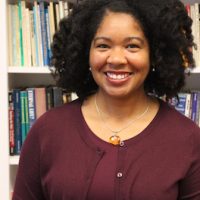 Donyelle McCray (Th.D.’14) is an assistant professor of homiletics at Yale Divinity School, focusing her research on African American preaching, sermon genre, and modes of authority. She has published The Censored Pulpit: Julian of Norwich as Preacher and is currently working on a project that examines the preaching and spirituality of the Rev. Dr. Pauli Murray.
She will be a featured preacher at the Homegrown: N.C. Women’s Preaching Festival Oct. 15-16.