Called to Much More than Just Saving Souls

Two years ago, on the 50th anniversary of Catholic-Methodist Dialogue, Edgardo Colón-Emeric had the chance to meet with Pope Francis and to present him with a book chronicling the discussions he and his conversation partners have held over the years—a book Colón-Emeric translated into Spanish himself.

As much as he enjoyed his audience with Francis—both are native Spanish speakers—the moment that really stood out to him took place far below the Vatican palace.

It was in the catacombs, dozens of feet below St. Peter’s Basilica, that 16 people—eight Catholics and eight Methodists—gathered in the cool darkness to pray surrounded by stone tombs and glass reliquaries filled with bones. There, next to what many Roman Catholics believe may be the tomb of Peter, one of the 12 apostles and Jesus’ designated successor, the group recited the Lord’s Prayer, asking God to “forgive us our trespasses as we forgive those who trespass against us.”

To Colón-Emeric, it was a sacred moment that offered a glimpse of unity between two Christian groups that for centuries have mostly prayed apart. 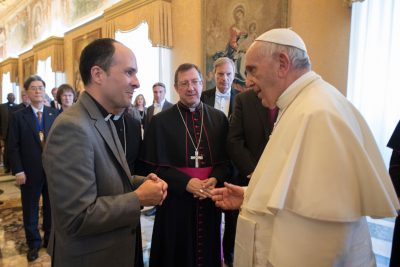 “Above ground, everything separated us: marble, Bernini, Michelangelo,” said Colón-Emeric. “But there we were just disciples praying together. We were praying before our Peter, not the Catholics’ Peter or the Methodists’ Peter. For me, it was that fundamental sense that we are broken, but we’re not broken all the way down. With God’s grace, those cracks and wounds will be healed, we will be restored in the end.”

Those kinds of moments are what animates Colón-Emeric’s ministry at the Center for Reconciliation, where he just completed his first full year as director.

Founded in 2005, the center works to cultivate seeds of reconciliation around the world. Through its annual convenings in East Africa and Northeast Asia, its Summer Institute for Reconciliation on the Duke campus, and its ongoing training for Central American ministers, the center seeks to teach and model a biblical vision of reconciliation.

Colón-Emeric is particularly suited to the task. A native of Puerto Rico, he has cross-cultural understanding, having moved to the continental U.S. to attend Cornell University. Growing up a lukewarm Catholic, he encountered the Methodist church through Cathleen, now his wife, and underwent a conversion to a Protestant, and a specifically Wesleyan, strain of Christianity. Over the years, he also felt a passion and a calling to do the work of reconciliation—not just with God but with all creation.

“The mission of the church is not just to save souls. The most robust understanding of reconciliation is one in which we need to be reconciled to God, but not God alone. Being reconciled with God empowers us and gives us a task of being reconciled to each other and to all creation.”

While some Christians see personal salvation as the sole aim of Christian faith, the vision of Colón-Emeric and the Center for Reconciliation is much bigger. They draw on a passage from 2 Corinthians 518:  “All this is from God, who reconciled us to himself through Christ and gave us the ministry of reconciliation.”

“The mission of the church is not just to save souls,” Colón-Emeric said. “The most robust understanding of reconciliation is one in which we need to be reconciled to God, but not God alone. Being reconciled with God empowers us and gives us a task of being reconciled to each other and to all creation.”

That larger vision of reconciliation has taken Colón-Emeric around the world, helping people in Latin America, Asia, the U.S., and Africa find a theological framework for the hard and often painful work of reconciliation.

Each year Colón-Emeric travels to Africa for a summit of the Great Lakes Initiative, a gathering of church leaders from seven East African countries. The Center for Reconciliation convened the initial meeting in 2006 and has since turned over leadership of the initiative to local leaders who take up issues of ethnic violence, tribalism, corruption, refugees, and disease in that region of the world.

He does similar work in Asia through Northeast Asia Reconciliation Initiative, which brings together church leaders, educators, and scholars from China, Hong Kong, Japan, and Korea to discuss nationalism, territorial disputes, and the threat of nuclear weapons.

In both those projects, the agenda is decided by the participants.

“We don’t bring the context,” explained Colón-Emeric. “We offer a space for the context to develop deeper theological roots.”

Colón-Emeric walks alongside participants. He may help them name the ways one party has been injured by another party, a practice he calls lament, steer them toward a public confession, or suggest ways they might embrace forgiveness or restoration.

“I do not guide the journey; at best, I walk with participants on the journey of reconciliation, a journey where, guided by hope of the new creation, we rediscover the biblical practice of lament for our brokenness and move toward forgiveness and work toward restoration,” he said. 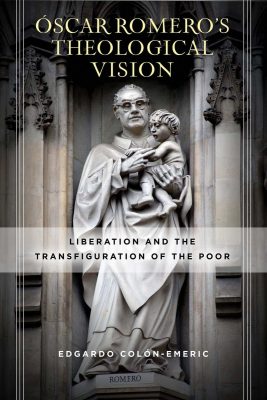 He is now exploring a similar initiative in Central America. It’s a region he has long toiled in, first as founding director of the Hispanic House of Studies at Duke Divinity School (he still serves as senior strategist there) and beginning in 2010 as the director of Central American Methodist Course of Study, which trains Methodist pastors who have not earned a formal master of divinity degree in such places as El Salvador, Guatemala, Honduras, Nicaragua, and Panama.

“Because of the history and social conditions of the communities where our Central American students work, it is impossible to think of theological education without thinking of the ministry of reconciliation,” he said.

Indeed, his many trips to El Salvador informed the scholarship in his book published last year, Óscar Romero’s Theological Vision: Liberation and the Transfiguration of the Poor. In it, Colón-Emeric explores the life and thought of the Roman Catholic archbishop—canonized as a saint in October 2018—who was assassinated in 1980 by a right-wing death-squad.

Colón-Emeric wants this new initiative in Central America to bring together scholars, church pastors, and NGOs to work on reconciliation around organized crime, violence, corruption, civil war, and other issues confronting the region.

His deep understanding of Central America—this year he will be traveling to El Salvador three times—has also led to flourishing friendships.

“I don’t think there’s one place he’s gone, that he doesn’t continue to go back to,” said the Rev. Audrey Warren, a Florida pastor and a graduate of the divinity school whom Colón-Emeric tapped to teach a course on pastoral leadership in El Salvador. “He understands that reconciliation at its core is about relationship.”

Journey of Reconciliation in Peru 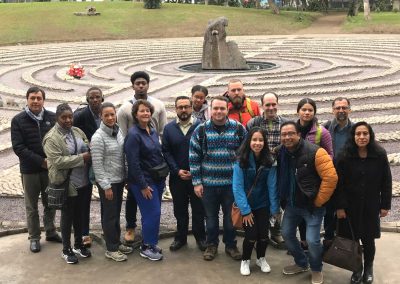 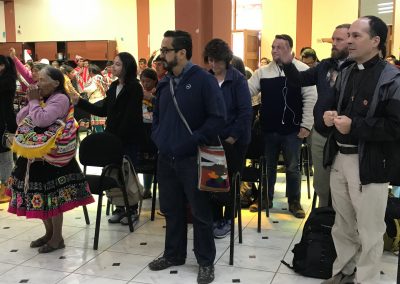 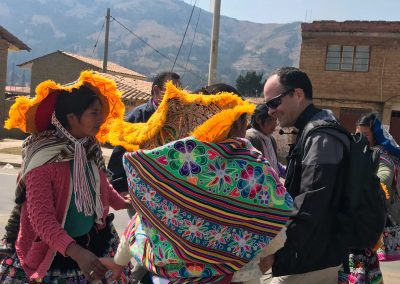 Welcome in village of Kcauri, Peru 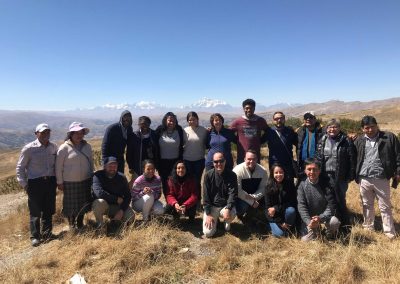 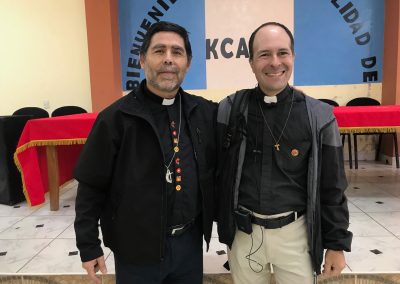 “You can’t separate the preaching of the gospel from working for peace and flourishing in your community,” Colón-Emeric said. “They’re not separate. They’re one.” To show his students what the work of reconciliation looks like, he took 11 Duke Divinity students on a trip to Peru in August as part of a new class called “Journeys of Reconciliation.”

Traveling to Lima, Cusco, and Machu Picchu, the group (which included several Peruvian church leaders, both Methodist and non-Methodist) examined the history of violence and oppression in Peru, the incomplete nature of the truth and reconciliation commission that met more than 15 years ago to investigate the human rights abuses committed during the 1980s and 1990s, and the role of the church in those events.

Back in Durham, the class planned to visit the Stagville Plantation, the historic Hayti community, and the Duke Homestead—the home, farm, and factory buildings of Washington Duke—to get a taste for what racial reconciliation work might look like locally.

“My hope is for students to see there’s more to ministry than what they might have thought and that this is God’s doing. God is inviting us to participate in restoring and reconciling all things. We’re invited into an even bigger adventure than we realized when we joined the church.”

Colón-Emeric has spent nearly his entire career at Duke, first as a student in the master of divinity program. After a five-year stint as a pastor of a Spanish-speaking church plant (he was the first Latino ordained as an elder in the North Carolina Conference of the United Methodist Church), he entered the doctoral program in theology. He became an assistant professor of Christian theology and director of the Hispanic House of Studies soon after earning his Ph.D. He recently was awarded tenure and promoted to associate professor.

Yet, these days, it’s sometimes hard to find him on campus.

But Colón-Emeric doesn’t complain about being too busy or having too many responsibilities, said Smith. He’s humble to the core, and “because he’s humble, he’s also very irenic.”

He’s guided by his commitment to instilling in students who are training to be pastors a commitment to doing the work of reconciliation. 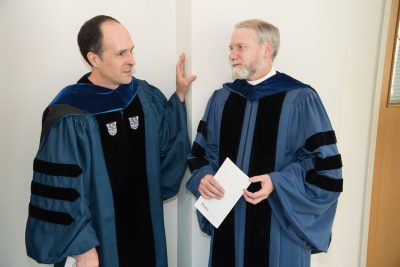 He rejects the notion that reconciliation is a cheap or sentimental concept, meant to move groups toward forgiveness, unity, and a Hollywood-style happy ending. Indeed, many people prefer terms such as justice or liberation as more accurate responses to longstanding structural inequities. But as a daily runner as well as a scholar, Colón-Emeric knows reconciliation is a journey, not always a destination. It’s that hope that keeps him going. Reconciliation work, he is convinced, should be guided by a vision of the end.

That’s what he saw in the Vatican catacombs when he prayed with Methodist and Catholic church leaders: a vision of true communion. He knows it’s unlikely that the two groups will overcome their differences anytime soon. But he has faith that in God’s time they will.

“If the end is peace, then we can walk confidently and be patient with difference and disagreement, knowing we’ll get there. The wait may be painful. There may be some cool-down times, or separation. But we know that at the end we’re one.”

Patrick Smith: Theological Ethics for the Public Good
“The Cohort Is Your Family”: Collaboration, Challenge, and Camaraderie in the D.Min.
Alma Tinoco Ruiz’s Journey from Mathematics to Ministry Leadership