Taking the Mind of Christ to the Hospital Boardroom

Roger Leonard had been serving as a member of the board for the Wellmont Health System in Kingsport, Tenn., which was struggling financially and missionally. When he was selected as the board chair, he faced the challenge of guiding the $750 million health system that included seven hospitals.

Leonard says the master of theological studies (M.T.S.) degree he earned from Duke Divinity School in 2015 was more helpful than his M.B.A. in leading Wellmont Health. At the time, Wellmont Health was navigating a difficult financial period following the departure of its CEO and CFO. The health system was struggling to provide adequate service to rural, underserved areas where a substantial portion of the population was dealing with chronic illnesses such as high rates of obesity, diabetes, and lung cancer.

After a few months on the volunteer board, Leonard was asked to take over the audit and compliance committee; a few years later the investment committee. “Along the way, our board made the decision to initiate a strategic evaluation to address the declining reimbursements in health care,” he said.

Wellmont wanted to shift the emphasis on improving health by focusing on prevention, not just treatment.

“About half way through the process, our sole in-market competitor with whom we had fought for years approached us with a remarkably innovative plan to merge and reinvest those synergies into improving population health and adding behavioral health and addiction services,” Leonard said. “This was a major act of regional reconciliation that would end decades of wasteful divisiveness in the delivery of health care within our combined 22-county market.”

“We are called to move beyond the self-limiting mindset of scarcity and adopt the mindset of Christ that embraces an abundance mentality. It is a mindset that unleashes our imaginations in a manner that opens us up to innovation and creative new possibilities. It is a mindset that is inherently entrepreneurial. It produces within us an energy of hope that is life-giving if we only accept it.”

“My course work with Dr. Warren Kinghorn, a theologian and physician at Duke University, dramatically changed my perspective and drove my commitment to help create an innovative regional experiment in population health by moving the locus of health care back where it belongs—in the community,” he said. “Health care can be delivered in the hospital setting, but improved health is something that only happens in the home and community. Ballad Health is engaged in creating a region-wide accountable care community that will engage people and nurture the practices within the community that improve the health of our people.”

Leonard knows that the decision to merge two health systems that were former market competitors will lead to better outcomes for the community—but also that the results of innovation and creative approaches take time to emerge. “The post-merger integration continues to be a difficult process, and it will take three to five years to get all the pieces in place, but the benefits in improved community health and regional accord will benefit our people for generations to come.”

Leonard came to health care during a time when he was taking a break from the family business of electrical products and services. “My father was trained in electrical apparatus repair and service by the U.S. Navy and General Electric,” he explained. His father founded ElectroMechanical Corporation. “I started working at his shop when I was 10 or 11, sorting used nuts and bolts so they could be reused. Then, as a teenager, I bailed used copper that was stripped out of electric motors for recycling.”

By the time he received his bachelor’s degree in operations management from the University of Tennessee at Knoxville, the business had expanded into custom electrical switchgear and transformers. Leonard worked his way through jobs in purchasing, sales, production control, and general management. After graduating from Wake Forest University with his M.B.A., he was named chief financial officer and later president and chief operating officer.

“In 2008, I decided that I had accomplished all that I could and felt like the family dynamics were becoming less healthy, so I left to take a year off and went to two fly-fishing guide schools,” he said. “I had been in offices and manufacturing plants all my life; I wanted to spend time outdoors. I wanted time to just be.”

The Road to Seminary 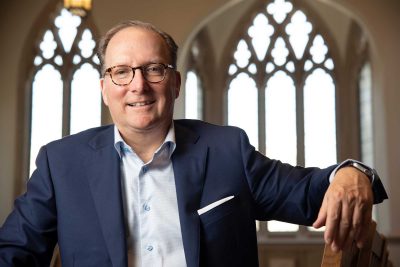 During his youth in his home church, Leonard was expected to attend seminary. He recalls his grandmother taking him to church for Sunday school and worship. “She was a special and inspired woman who had a servant’s heart and was our county school system’s visiting teacher—or what would be known today as the county school system social worker. “She would often tell me stories about the horrible conditions that kids my age were living in throughout the ridges and hollers of southwest Virginia. Those stories and her compassion deeply and indelibly informed my perspective, and it still does today.”

His father-in-law, Ed Steffner, graduated from Duke Divinity School in the late 1940s and was in the ministry for 10 years before returning to medical school to become a general practitioner. “We often talked Scripture and theology, and he was the first to explain hermeneutics to me. He spoke often about how he loved Duke Chapel, and late in his life wanted to return for a visit.”

So about four years into the health system merger, Leonard decided to shift gears. “I wanted to take a break, decompress. I wanted a spiritual experience and to be challenged academically.” Leonard first applied and was accepted to the Master of Arts in Christian Studies (M.A.C.S.), a one-year program that Duke Divinity offered for several years. But then he decided to seek his M.T.S. “I was interested in intersections of theology, social work, and social entrepreneurship. I want to devote the rest of my career to social impact and social ministry.”

Almost immediately, he felt at home. “On a personal level, I loved the opportunity to be in a community where I could worship three, four, or five days a week. After all that I had experienced—both good and bad— over the course of my 52 years, I felt like I needed and desperately wanted spiritual re-formation.

“Moreover, I found Duke Divinity School to be an enormously welcoming and hospitable place for mid-career persons who are keen to do mid-life spiritual discernment in an intellectually challenging academic environment.”

That didn’t mean theological study and divinity school life was all smooth sailing. “The experience at the outset was admittedly a bit intimidating. My academic chops were a bit rusty, and, to use a musical analogy, I wasn’t certain that I could play in their key— not having a liberal arts background of any kind.”

But Leonard discovered that the resources of Duke Divinity went beyond the worship services and the classroom lectures. The community of people were ready to welcome and support him, even as a mid-career professional returning to the classroom for the first time in years.

“My initial fears were vanquished on the first day of class,” he said. “I was still learning my way around the divinity school labyrinth and a bit terrified as I made my way to my first class that morning. As I turned the corner at the bookstore and looked down the hallway to the left, I saw Kate Bowler, the associate professor of the history of Christianity in North America, who had delivered our class orientation, gleam. She saw a lean, bearded man in a clerical collar—our beloved professor J. Warren Smith, associate professor of historical theology—and she raised her arms in the air and loudly exclaimed, ‘One of my favorite people!’ They embraced, and I knew that I had found a spiritual home and place of belonging.”

“I told many people, including professor emeritus Richard Hays, that the Divinity School’s motto should be (with apologies to the apostle Paul), ‘Be Renewed by the Blowing of Your Mind’.”

A Change in Perspective

During his time at Duke, Leonard’s thinking about the corporate world changed. “I thought about business differently. Health care had become a business rather than a ministry, but the first hospitals were created by the early church as a ministry, not as a business.”

Leonard’s perspective on ministry changed as well. “It tasked me to be attentive to my inadequate understanding of mission and ministry within my community and to the pervasive role that structural sin plays in our consumer-capitalist culture. I realized that the goal of being human is to flourish, not simply to function—which is often the default objective of medical and social services in a resource-constrained world.”

His time at Duke Divinity earning an M.T.S. helped Leonard see how the example of Christ could help him seek a spirit of unity and hope, even in the world of business and health care management.

“We are called to move beyond the self-limiting mindset of scarcity and adopt the mindset of Christ that embraces an abundance mentality. It is a mindset that unleashes our imaginations in a manner that opens us up to innovation and creative new possibilities. It is a mindset that is inherently entrepreneurial. It produces within us an energy of hope that is life-giving if we only accept it. I told many people, including professor emeritus Richard Hays, that the Divinity School’s motto should be (with apologies to the apostle Paul), ‘Be Renewed by the Blowing of Your Mind’.” The Divinity School offers a renewing process of intense spiritual and intellectual examination that forms its students into ‘New Creation!’”

Leonard would love to see more people adopt the mindset of Christ and embrace the spirit of unity and eternal hope that is life-giving, exemplified so poignantly to him at Duke Divinity School.